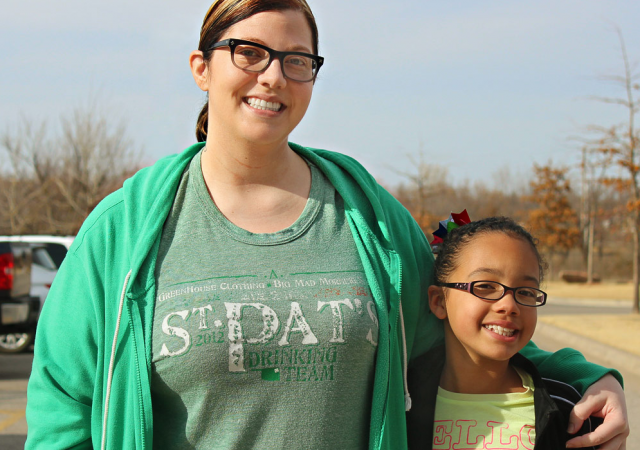 Tenika Clemmer and her daughter, Jaycee, are setting out to do something they have never tried before – participate in a run. On Saturday, March 16, Tenika and Jaycee, along with a special group of participants, will be walking and running in Tulsa’s St. Patrick’s Day Run on Brookside. For Tenika, it is especially important that her daughter will be right by her side for the 1-mile fun run/walk. “My 8-year-old daughter motivated me to be around for a while,” she says.

At 23, Clemmer was taking medication for high blood pressure and felt she was headed toward developing diabetes as her mother had. “I knew that was exactly where I was going to go if I didn’t change something,” she says. “I was a chronic dieter. You try, try, try to lose weight and you can’t, or you do and you gain it back.”

More than trying to lose weight, Clemmer worried about her health. “Your health risks go through the roof when you’re overweight, diabetic and hypertensive, and obviously I was too young to have a heart attack,” she says.

When a friend suggested Clemmer attend a seminar at the Center for Bariatrics at Bailey Medical Center, she knew it was time to make a change. Meeting Medial Director for The Center for Bariatrics at Baile Medical Center Dr. JoeBob Kirk and hearing about the details of the program gave Clemmer the confidence to continue working toward change. She adds, “It’s hard not to fall in love with Dr. Kirk.”

On Jan. 22, 2013, Clemmer had her surgery. Today she has more energy, enjoys walking and biking, and has already lost 50 pounds. Participating in the St. Patrick’s Day Run is the first, but not the last, event she plans on this year. The American Heart Association Heart Walk and Color Run are both on her list. “I just want to be a healthier me,” she says of feeling good and being active after surgery.

Together with other pre-op and post-op patients, Clemmer and Jaycee will start a new tradition of healthy living for their family. “I want her not to go down the same road I did and want her to be active,” she says. “If we do these things together, we’ll be more motivated.”

Are you a pre-op or post-op Bailey Bariatric patient and interested in participating in the St. Patrick's Day Run? Register online and let us know you have signed up. Email David Steward at david.steward@baileymedicalcenter.com or message us on Facebook. We will be gathering before the event outside Runner's World at 43rd and Peoria under the Bailey tent. We look forward to seeing you there!